We Are Not Alone

I once led a class of preschoolers in an experience of the creation stories in the Bible. I mixed up two big batches of modeling clay. One we rolled into a giant albeit lopsided ball that was like the earth that God created. The other, the children received pieces of to make into whatever preschoolers will make. Some just rolled their little ball around until it was like a rock and we stuck it onto the earth we had formed. If their little ball didn’t really get too round, we called it a lake and stuck on the earth. Some children could flatten their piece out pretty well and used animal shaped cookie cutters. We had doves, cows, dogs, and giraffes to put on the earth.

As the class time ended, we all stepped back to admire the cluttered, bumpy, disproportionate earth we had created in God’s creation and we said together with God, “It is very good.”

As parents returned to pick up their children, I told them that their creation would be here waiting for them next Sunday and we would explore the story of God creating humans. 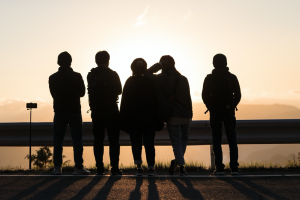 One father stepped over to his three-year old son and asked, “What did you make today, James?” James pointed rather indecisively to one of the giraffes. The father said, “You made that? It belongs to you. You should take it home.” Then, the father peeled an especially short-necked giraffe out of a lake, distorting the dove that was flying overhead, and leaving behind a crater large enough for an iceberg to fall into.

He stuck the isolated giraffe in his son’s hand and took the time to say to me, “You know, at this age, they think everything is theirs.”

It felt as though a snake had slithered through the room. As I left church that day, I was not surprised to find a mangled ball of giraffe, dropped carelessly, in the stairway.

Genesis 1 has the first creation story in the Bible. It’s the story I was telling the preschoolers that day. Genesis 1 tells us what God did step by step to make the world and all that is in it. Genesis 2 focuses almost exclusively on humans – humans and relationships.

Genesis 2 tells us God created humanity from the earth. The Hebrew word for humanity is adam, which is – in the way it can be in Hebrew – neither masculine nor feminine. Adam is related to the Hebrew word adamah which means “dust of the earth.” Genesis wants us to know that humans are related to creation, that we have a relationship with the environment in which we dwell.

Genesis 2 also tells us about the special relationship between God and humanity. God gives great freedom to adam and establishes limits. Humanity is created by God and like God in some ways, but humanity is not God.

Genesis 2 tells us, God wants more relationship for humanity. God has this profound insight that it is not good for adam to be alone and God forms a whole series of creations as possible companions. There’s the dove, the cow and our giraffe. And a dog! Surely, the dog could be adam’s best friend.

God sees that none of these offer the kind of relationship that will ultimately end adam’s loneliness. So, God creates another human being. Woman – ish in Hebrew – is made from adam just as adam is made from adamah. There is nothing subordinate or secondary about the second being made from the first. Indeed, the second being is essential to the first. What is essential is that there is relationship. God rescues humanity from loneliness by creating relationship with other humans.

What does this mean for us? It means: God made us. We belong to each other. None of us is alone. God wants us to be at home together.

It means we have a relationship to all of creation – the earth, what grows in it, the wild creatures and the domesticated animals. The world and all that dwells therein is not ours to take away and do with as we choose. We are not made to use the earth and leave it behind us in a crumpled forgotten ball.

It means that we have a relationship with humanity. We are all created by God from the dust of the earth and from one another, without hierarchy, without subordination. We are made to help one another, to work together, to be companions in life. We are not made to disregard or forsake the other, to take what we want, and clutch what it ours, without caring about humanity.

It means that we have a relationship with God. We -like Adam and Ish and three-year-olds everywhere – reflect the image of God at times and often step over the limits that God has set for us. We do the very thing we should not do. It means that God is so committed to relationship with us that God came to us as adam – took on humanity – and showed us how God made us to be. Christ showed us that we are not now – not ever – alone.

No matter our age, it’s not easy. Relationships are complicated. When we use one part of creation, it is easy to corrupt another. When we make something new, something else falls away. When we help each other, it can hurt. Though we are of one flesh and bone, we are so different and difficult to understand. It can seem so much easier to grab whatever fruit we want and take it away to eat all by ourselves.

When we live as God created us to be, when we live as Jesus Christ showed us, we reveal to the world where it came from and why it is here. That truth releases a creative, liberating power into all that is and forms relationships of tenderness and strength. Together, we can step back and say with God: “This is very good.”