We are all daughters and sons.

If you were to take a picture of me with an item to tell the story of my faith, I think it would be a tassel.  We call them tzitzits.  They are the fringe attached to four corners of clothing. All faithful Jewish men wear them, so of course, the rabbi Jesus of Nazareth wore them. 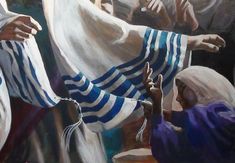 Before I touched the fringe of his garment, life was intolerable.  For twelve long years, I was bleeding. The pain was constant.  The fatigue overwhelming.  It was hard to get through the day and my sleep was always disturbed.

That was just the physical, the medical part of it.  Then there were the purity codes!  At their best, the purity codes remind us of the sacredness of life.  But when things go wrong or get interpreted by humans the codes become hurtful and isolating.

They sure worked against me.  For twelve years, I was ritually unclean.  Anyone who touched me became ritually unclean also, but they could wash and rinse and be clean again. I could not.  There was no amount of washing, rinsing, soaking or scrubbing that made me clean.  My husband could no longer make love to me, much less make children with me.  My family – my parents, my own children – all them had rinse and repeat whenever they came in contact with me. My children had to grow up faster than they should have because there was so much I couldn’t do. Either I was too tired to take care of my home or the ritual codes forbade me – whatever I cooked or cleaned – it was unclean.  I could only be with the other women in my condition.  I couldn’t go to the mikvah bathe for purification. The priests wouldn’t come near me. Jairus and the other elders agreed I could not attend even attend worship. 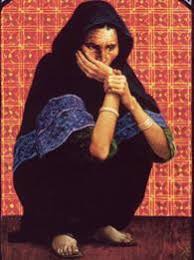 So along with being ill, there was this terrible stress on my family.   Including the cost!  Oh, the doctors.  They took my money, but I got no better.

I don’t mean to feel sorry for myself.  I know that plenty of people have it as bad as I did. Even worse. Even now.  Our medical options were limited. You have more now, still, people live with incredible pain, don’t they?  Men and women who are sick sometimes get sicker no matter how many doctors they see. Sometimes the cure is as bad as the disease.  People reeling out money and time – and still lose their strength, lose their sight, lose their organs, lose their minds. Lose hope.  It happened then and it happens now.

Maybe you think being unclean doesn’t happen anymore.  That our ritual purity codes are out of date and out of touch.  I’m not so sure.  From what I’ve seen here there are many people who get treated like they are unclean.  Think of those poor people in Wuhan province – isolated from their families, friends, and work. Of course, what they have is contagious.  But it doesn’t take having an illness that is catching for people to stay away.  I’ve seen people in your time avoid serious illnesses as though suffering might be shared by a handshake.  I’ve heard how people whisper the word “cancer” as if it is a dirty secret. People with mental illness, addictions, personality disorders are often judged, tolerated a little, and isolated.  Their community disappears. Maybe it has happened to you.

According to our purity codes, people weren’t just unclean because of illnesses.  You could be ritually unclean because of where you were from, who you associated with, the kind of work you did, or just because of how other people treated you.  The same thing happens now, doesn’t it?  People with accents.  People of color.  Non-binary people.  Victims of domestic abuse, or sexual assault.  Often you get treated in a way that isolates you.  It’s like there is something so wrong with you that turns others away.   You can’t be part of the community.  It’s worse, I think, now, because there are no clear codes.  No way to wash.  No way to get clean. No way to be restored to community.

I wanted that.  I wanted to be part of my family and community. I wanted the pain and the fatigue to end.

People said Rabbi Jesus had the power to heal.  He was in our city.  This was my only opportunity.  I had to find a way to get to him.  I would ask him to heal me. I covered my head well so no one who knew me could find me in the crowd and pressed my way through to him.  I was almost in front of him when suddenly it seemed I wouldn’t get my chance.

Elder Jairus rushed up to the rabbi.  His daughter was seriously ill.  He wanted Rabbi Jesus to come to his home and help her.  That poor little girl, I thought.  She was only twelve years old.  She had lived only as long as I had been bleeding.  I couldn’t keep the healer from going to her.  But I wanted so much to be well.

So I shoved my way through.  I got as close as I could to Jesus and reached out.  I reached out as if I were reaching for my life. 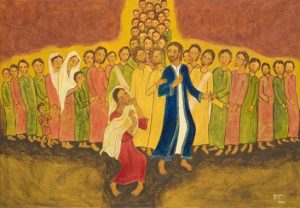 I touched the tassel, just the fringe of his robe.  Immediately, relief flooded my body.  I stood rooted in place, experiencing the change within me. The crowd milled past me. I did not care. I was imagining my future, my life restored.

But the rabbi stopped.  “Who touched my clothes?” he asked.  Part of me wanted to disappear, run away with my good fortune, but I owed him so much.  I pressed forward.  I went to my knees before him. I poured out my story and my pain.

I expected him to reprimand me.  I had made him unclean after all. I was still technically unclean as I hadn’t gone through the purification rituals.  I was sure he would scold me for keeping him from the important work of healing the daughter of the synagogue.

Then I heard him speak to me.  “Daughter.”  He said. “Daughter, your faith has made you well. Go in peace.

Oh, that poor child.  Before I was back on my feet, people came from Jairus’ house with news.  I had held up the rabbi and now she was dead.  I was stricken with guilt.  I wanted to be well, but I never wanted this to happen.

I hardly knew what I felt as I walked away.  I went to the ritual mikvah baths.  I cleaned all that old, old, tired blood and pain off of my body.  I washed and was clean.  I rinsed my garments and put on a clean robe. The women gathered around me – helping me, asking questions.  I presented myself to the priest, who quizzed me and made me show proof the flow had stopped.  They said they would send a message to Jairus when his mourning was over, and I would be welcome back in worship.

Then I went home. Home to be part of my family. I hugged my children, even though most of them were too old for hugs anymore.  I felt the embrace of my husband.

Before I cooked for my family, I would cook for Jairus’ family.  My health had cost them their daughter.  The least I could do was prepare something for the grieving family. I went to the oven I had been unable to use for 12 long years.

I used our best meal.  I added our finest oil.  I poured in precious honey.  It took my hands a little while to remember what to do.  My daughters came close, reminding me.

My husband and the whole family went with me as we made our way through town, the sweet cake still warm in my hands.  We could hear the commotion as we turned down the street on which Jairus lived.  Tears filled my eyes.  The rabbi called me daughter and I was clean and well, but this little daughter was dead.

It took a minute of being in the throng to realize the singing outside of Jairus’ house was not lamentation.  It was rejoicing.  “She got up” we heard someone say.  “She is alive.”

Jairus himself came out to greet us.  “Go see for yourself.” He beamed.  “And give her some of that cake.”  And there she was.  There we were two daughters.  The rabbi had touched us.  He raised us up.  He restored our health.  He gave us peace. He returned us to community.  All around us people danced and sang and touched and ate. We, two daughters, were part of it all. 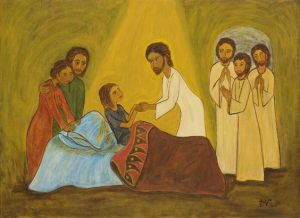 If you were to take a picture of me, with a tsiskit tassel, I would tell you this story.  Perhaps you will write it off as the ramblings of a post-menopausal woman.  Perhaps you will remember that eventually I and the even Jairus’ little daughter died.  Yes, and so did the rabbi Jesus.  But that wasn’t the end of him.  And it wasn’t the end of me or Jairus’ little daughter.  Our stories are still being told.

I know this. Jesus healed me even when others couldn’t.  He called me his own when others wouldn’t claim me. He restored me to community when others kept me out.  I believe he will do the same for you.  I believe he expects the same from us.  We are all daughters and sons.  Jesus the son of the Most High God wants us to follow him into community – to care for one another, to honor one another, to belong to each other.  No one should be left alone in their pain, their weariness and otherness.

The picture I really want is of us – our communities, rising up in peace just as Jesus told us.